One of the last few remaining areas of natural heathland in East Surrey, Reigate Heath is listed as a Site of Special Scientific Interest (SSSI), Common Land and as a Local Nature Reserve (LNR) and has a past dating back thousands of years. It is an important example of the lowland heath habitat, acid grassland and wet woodland, and has a number of tumuli – Bronze Age burial mounds (3-5000 years old) which have been designated Scheduled Ancient Monuments. 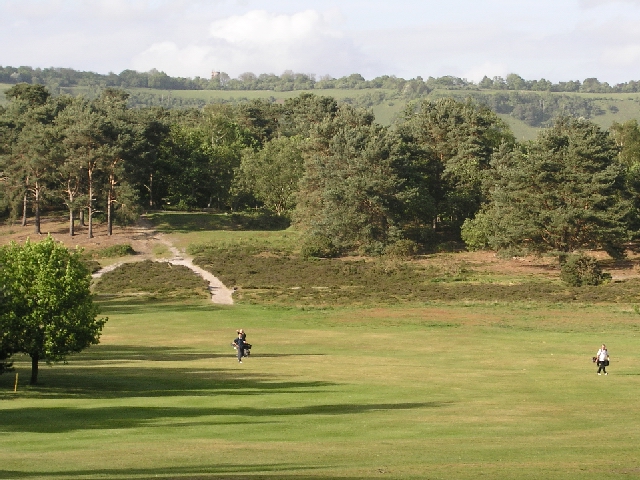 There is a golf course within the heathland area, but 200 years ago the Heath was a wild, open place, covered with gorse and heather. Woe betide the hapless traveller who ventured into the area on their way from Reigate to Dorking. Highwaymen and brigands lay in wait. But anyone who was caught and convicted as a highwayman was guaranteed to meet their end on the Heath too on a gibbet erected near where the present windmill now stands. The last remains of the gibbet were finally removed in 1817 about the time when pine trees were first planted on the Heath on the tumuli mounds. Also in the early 1800s a racecourse was built on the Heath and race meetings were regularly held there, until 1838 when it was closed due to financial reasons.

The Heath is also the site for an unusual windmill. Built in 1765, the Grade II* listed post mill has a chapel inside it, installed in 1880 as an extension of St Mary’s Parish Church, Reigate.

In 1895 Reigate Heath Golf Club was established and a nine-hole golf course was constructed on the Heath, which was owned at the time by Lady Henry Somerset. One of the conditions she imposed on the new club was that lady members were to be treated as equals, being allowed to vote and take part in competitions. On her death in 1921, she bequeathed the entire Heath to the people of Reigate and now the golf club rents the course on a long lease from Reigate and Banstead Borough Council (RBBC).

To print off your own site guide, please click here.

The Reigate Area Conservation Volunteers (RACV) have worked on the Heath since November 1989 restoring the heathland community by clearing the tree & scrub growth (to view their website click here.).

To view more details about its management, please click here.

If the link does not work, try pasting the address shown below into your browser to view or download the current plan that runs until Spring 2017.

Watch this space for upcoming consultation on and details of the next Management Plan 2017-2022.